Click on DETAILS for pricing and other information.
Click on > to advance to the next NIOSA Poster. 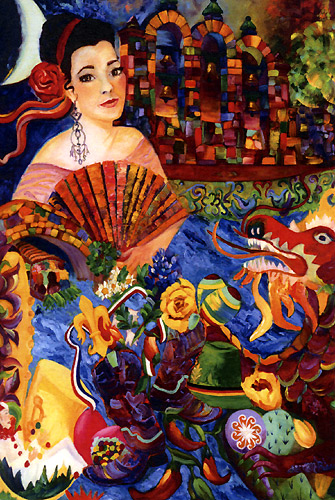 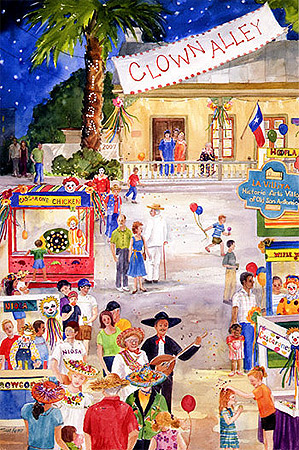 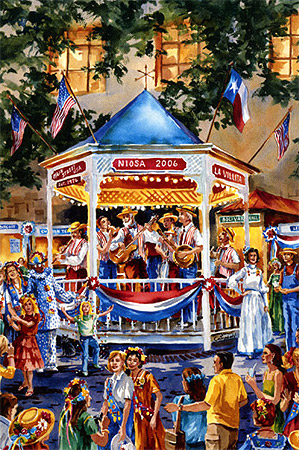 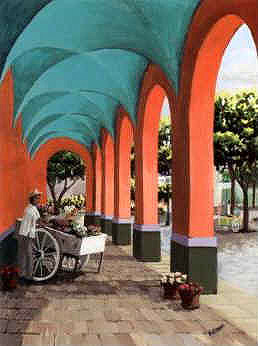 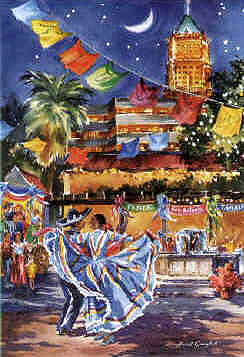 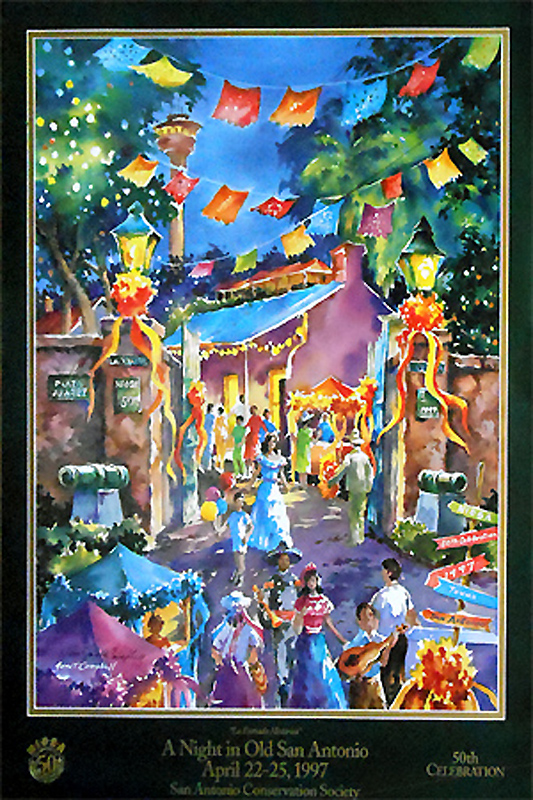 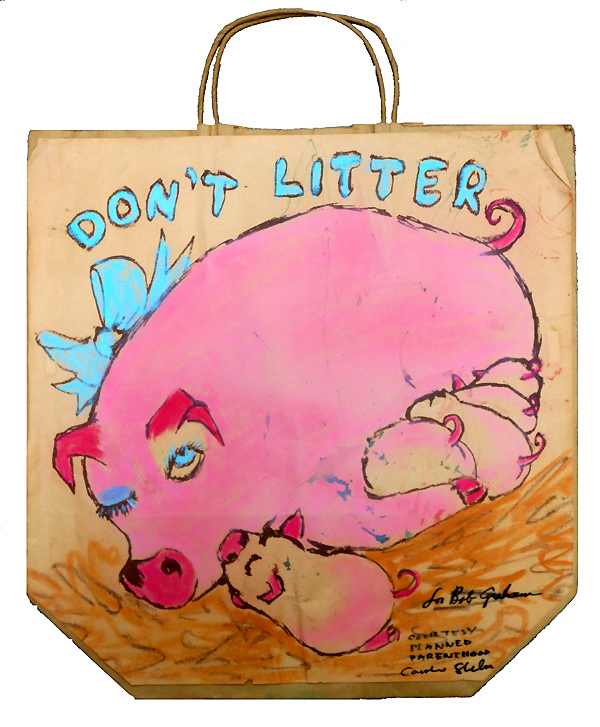 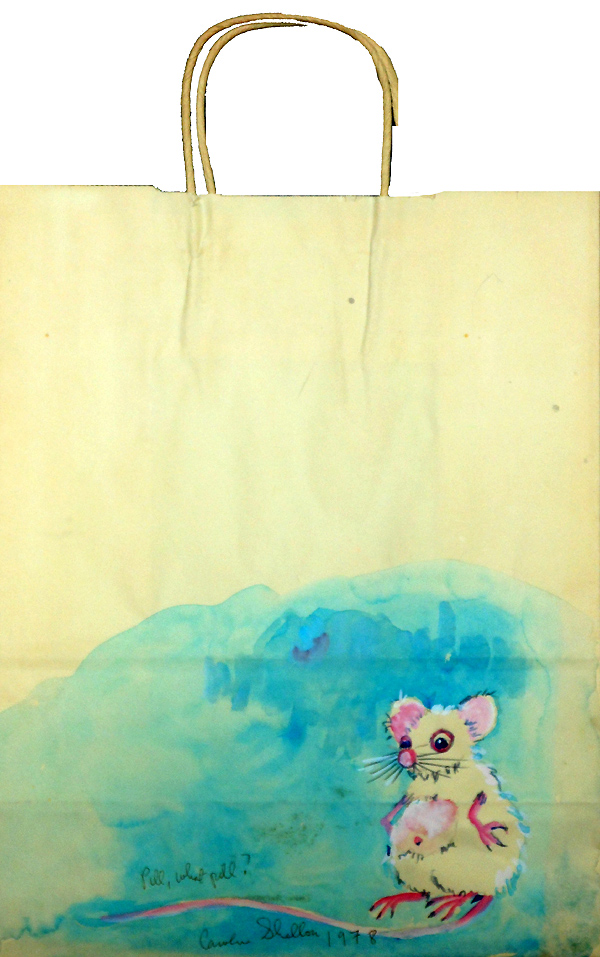 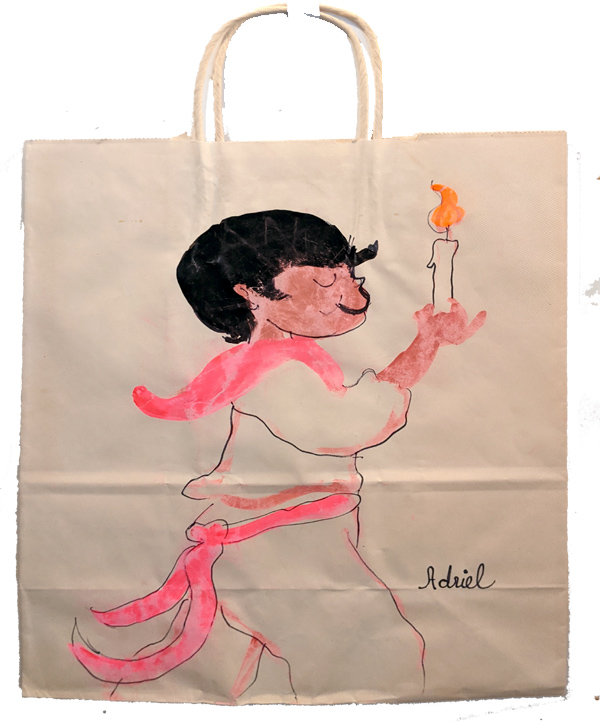 "For seasoned visitors to A Night in Old San Antonio (NIOSA), the Bolsas Booth — like Maria’s Tortillas and anticuchos (marinated grilled beef on a stick) — is one of the classic, can’t-miss stops at the annual festival in La Villita, a Fiesta San Antonio event that benefits the San Antonio Conservation Society. Bolsas, in this context, are hand-painted paper bags, a convenient place to stow freshly purchased cascarones, folk art and some of the neater treats offered by the dozens of food-and-beverage booths throughout NIOSA’s several theme areas. It might be a challenge as you wend your way through the grazing crowd, but it’s worth your while to keep stains and splashes off the not-so-humble paper bag, suitable for framing after the fact. NIOSA, as such, dates back to 1948, and its brown-bag art tradition began in the late 1950s or early 1960s with renowned local watercolor artist Caroline Shelton, a longtime Conservation Society member and NIOSA volunteer who decided to put her talents and those of her artist friends to work for the cause of historic preservation. Shelton, who referred to herself as “NIOSA’s bag lady,” was a formidable professional in San Antonio’s art world. After moving to San Antonio in 1943, she became advertising director at Joske’s department store, art instructor at Trinity University and author of three books of her San Antonio scenes, including “Festivals of San Antonio.” As coordinator of what was once called “the paper bag concession” at NIOSA, she committed to producing 500 bolsas a year, recruiting colleagues and art students to help. “Almost every artist in San Antonio has painted those bags for NIOSA,” Shelton told the San Antonio Express, March 29, 1984. Among them were Watercolor Gang stalwarts Finis Collins, Clay McGaughy, Lee Ricks and Gordon West, as well as artist/educator Amy Freeman Lee and McNay Museum Director John Palmer Leeper. Another was popular local artist Adriel McGill, one of whose drawings is featured on this year’s NIOSA medal. Most bags were decorated in advance, says McGill’s daughter Carolyn Hoelscher, who has served as Bolsas Booth chairwoman since the early 1980s. Shelton typically held bag-painting sessions on the patio of her house in Terrell Hills, although some artists, including McGill, took theirs home to paint, often using up leftover paint. In those days before paper or plastic was a choice, brown-paper grocery bags and unprinted brown or white shopping bags were cheap and easy to come by. The sale of the painted bolsas not only benefited the Conservation Society directly but encouraged NIOSA visitors to buy more at the other booths. People were encouraged to buy two, says the San Antonio Light, April 17, 1970, “one to carry home treasures or food and one to frame.” Some just took the chance to snap up original works by noted artists at a lower price than they would sell for in galleries or at art shows. During Shelton’s tenure at the Bolsas Booth, the bags were emblazoned with typical scenes from NIOSA, especially those representing the festival’s Mexican Market area, where the booth is located and which Shelton referred to as “my home at NIOSA.” Selling works “embellished with wit and bluebonnets,” it became “the accepted gathering place for her uncounted friends,” according to a Shelton profile in the San Antonio Conservation Society Newsletter, June 1978. “People knew to come looking for a less-expensive, if less-detailed, piece of art donated by well-known local artists,” says Hoelscher, also a painter. “Many of these pieces were framed and hung on the wall in homes and businesses.” The attraction eventually grew from a couple of tables with folding chairs to a real booth with a roll-down sun shade for Shelton, “since we faced due west.” Shelton, who died at age 84 in 1993, painted her last bolsas the year before. Other artists of her era also faded out of the picture. “Gradually, over the years, the people who came looking for real art thinned out and mostly disappeared,” says Hoelscher. “Many of today’s NIOSA guests are mostly looking for inexpensive but unusual and unique souvenirs.” Bolsa subject matter has broadened to depict cascarones “with real confetti glued on,” the Alamo and San Antonio’s other Spanish colonial missions, chile peppers, floral wreaths with ribbon streamers and Fiesta royalty crowns. Hoelscher’s daughter Danielle Beadle joined the family bolsas tradition a few years ago with NFL- and university-theme designs. The Bolsas Booth is to the right of the front doors of Villita Assembly Hall and accepts cash or event coupons. This year’s bolsas will include brightly colored Aztec and Mayan designs, some by Jefferson High School students, and about 50 “vintage bolsas” painted in years past." --- San Antonio Express-News April 18, 2015